Arbitration is widely considered to be less favorable to employees and more favorable to businesses than jury trials.  As a result, many employers require their employees to sign arbitration agreements as a condition of getting hired or keeping their jobs.  In other words, employers try to force employees to give up their right to sue in court and have their cases decided by a jury. 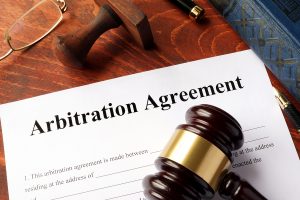 But a recent trial court opinion concludes that firing an employee because she refused to sign an arbitration agreement since she did not want to give up her right to a jury trial in any future discrimination lawsuit against her employer was an act of retaliation in violation of the New Jersey Law Against Discrimination (“LAD”).  The LAD prohibits employers from retaliating against an employee because she has “opposed any practice” protected by the LAD, or from coercing, intimidating or threatening anyone’s right pursuant to the LAD.

Jorvia Cator, an African American woman, began working for WRDC Corp. as a hotel reservation agent in March 2016.  Approximately one month later, WRDH implemented a new policy which required all employees to sign arbitration agreements that forced them to bring virtually any claim against the company in arbitration rather than in court.  Those agreements expressly stated that the employee is waiving her right to a jury trial.

During the year Ms. Cator worked for WRDC, she complained about race discrimination more than once, and asserted that her boss was a racist.

Ms. Cator did not sign an arbitration agreement.  Instead, in August 2016, she submitted an unsigned copy of the agreement on which she wrote:  “I do not wish to waive my right to sue for discrimination and therefor[e] I do not agree to arbitrate my claims of discrimination.”

In response, WRDC suspended Ms. Cator without pay.  WRDC admits that it did so because Ms. Cator refused to sign an arbitration agreement.

Ms. Cator sued the company, arguing it violated the LAD by firing her in retaliation for refusing to give up her right to a jury trial under New Jersey’s anti-discrimination law.  She eventually filed a motion for summary judgment, asking the trial judge to rule in her favor on that claim as a matter of law.

In Cator v. WRDC Corp.., the trial court agreed and granted summary judgment in Ms. Cator’s favor, finding WRDC retaliated against her in violation of the LAD.  The court recognized that the New Jersey Supreme Court has recognized the LAD creates a “clear right to a trial by jury,” and the purpose of an arbitration agreement is to waive the “time-honored right to sue.”  It also noted that arbitration is supposed to be a matter of agreement between parties, and not something that one party forces on the other.