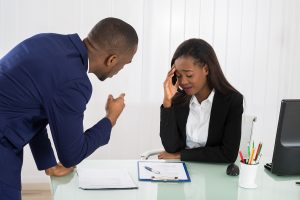 Angela Maselli worked for Valley National Bank.  She claims her supervisor bullied and mistreated her to the point she needed to take a medical leave, and when she returned from that leave, she needed to transfer to another unit within the bank.  Ms. Maselli further alleges that she subsequently lost her job when Valley downsized her new business unit, but that her original unit was not impacted by the downsizing.  Thus, she claims she lost her job as a result of her former supervisor bullying her.

Ms. Maselli filed a lawsuit, asserting the Bank violated the anti-harassment provision in its Code of Conduct and Ethics.  The Code includes a disclaimer, which states:

Employment is at Will:

Employees of Valley National Bank are generally employees-at-will. This means that both the employee and Valley have the unrestricted right to terminate the employment relationship, with or without cause, at any time. No employee or agent of Valley National Bank is authorized to make any oral or written representations altering the at-will employment relationship unless made the subject of a specific written contract of employment. Such contract can only be authorized by the Chairman, President, and CEO.

It should be noted that nothing contained in this Valley Code of Conduct and Ethics or in any policy or work rule of Valley shall constitute a contract of employment or a contract or agreement for a definite or specified term of employment.

The trial court granted the Bank’s motion to dismiss, finding the disclaimer prohibited Ms. Maselli from bringing any claim based on the Code.  Ms. Maselli appealed.

In an unpublished opinion, the Appellate Division reversed the trial court’s ruling.  It explained that the disclaimer does not necessarily mean the entire Code of Conduct is not a binding contract.  Rather, while a jury could find the disclaimer means nothing in the Code is an enforceable contract, it could instead find that the disclaimer merely means the Code does not guarantee employees a job for any particular period of time.