In a recent opinion, the Third Circuit Court of Appeals ruled that an employer’s failure to promote an employee was not legally actionable discrimination where the employer promoted the same individual to the same job approximately one month later.

Evon Grossberg worked for the Hudson County Department of Social Services as a Human Resources Specialist.  Ms. Grossberg is African American.  In July 2013, she applied for a promotion to the position of Training Technician.  At the time, Ms. Grossberg was 58 years old. 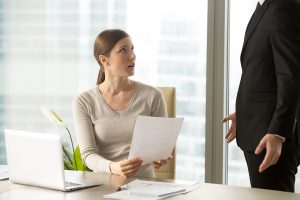 In early August 2013, Hudson County promoted another employee who was in her low to mid-twenties and Egyptian, rather than African American, to the position of Training Technician.  When Ms. Grossberg asked her supervisor why she had not received the promotion, her supervisor told her to speak to her union representative. Ms. Grossberg then filed a complaint with her union representative.  She also submitted an online intake form to the United States Equal Opportunity Commission (“EEOC”) as part of the process to file a Charge of Discrimination.

Ms. Grossberg filed a lawsuit in which she alleged that Hudson County discriminated against her because of her age and race, in violation of the New Jersey Law Against Discrimination (“LAD”), Title VII of the Civil Rights Act of 1964, and the Age Discrimination in Employment Act of 1967 (“ADEA”).  The District Judge dismissed Ms. Grossberg’s case on a motion for summary judgment, finding there was not enough evidence to support her claims.  Ms. Grossberg appealed.

On July 6, 2018, in Grossberg v. Hudson County Department of Human Services, the Third Circuit affirmed the trial court’s dismissal of Ms. Grossberg’s case.  In an unpublished opinion, the Court explained that an adverse employment action occurs when an employer fires, refuses to hire, or makes another decision that is “serious enough to alter the employee’s ‘compensation, terms, conditions, or privileges of employment,”” deprives her of job opportunities, or otherwise adversely affects her status as an employee.  The Court concluded that Hudson County’s relatively short delay before it promoted Ms. Grossberg was not an adverse employment action under the circumstance.  It also recognized that Ms. Grossberg admittedly had not lost any compensation as a result, and concluded that she could not prove she suffered any “tangible and significant deprivation of any employment-related opportunity” as a result of the relatively short delay in receiving her promotion.

In an attempt to overcome the fact that Hudson County promoted her only one month after it promoted her co-worker, Ms. Grossberg argued that Hudson County did so to cover up for the fact that it had discriminated against her in August.  In other words, she claimed the County was aware of her discrimination claim, and quickly promoted her to cover up its discrimination.  The Third Circuit rejected this theory, which it referred to this as a “circuitous argument” and a “novel claim,” finding there was no evidence to support it.