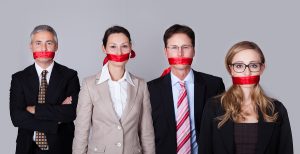 END_OF_DOCUMENT_TOKEN_TO_BE_REPLACED

A recent employment law case recognizes that in certain circumstances, an employer does not violate federal law if it requires former employees to sign away their legal claims against it as a condition to rehiring them as independent contractors.

In 1999, Allstate Insurance Company decided to treat all of its sales agents as independent contractors. Accordingly, that November Allstate fired 6,200 sales agents and gave them four options: (1) return to work as an independent contractor and receive a $5,000 bonus and other benefits; (2) receive $5,000 and the right to sell the employee’s Allstate account in September 2000; (3) receive 12 months of “enhance severance” pay; or (4) receive 13 weeks of ordinary severance pay.

To accept any of the first 3 options, a sales agent was required to sign a release waiving any existing legal claims he or she had against Allstate. Most of the employees accepted one of those three options. The employees who refused to sign releases received only 13 weeks of severance pay.

END_OF_DOCUMENT_TOKEN_TO_BE_REPLACED

Some of the most common questions employees ask employment lawyers relate to severance pay. Below, we have answered a few of the most frequently asked questions about severance agreements under New York and New Jersey law.

Q: I have been laid off or fired by my company. Am I entitled to severance?

A: In New York and New Jersey there is generally no legal requirement for a company to pay severance to its employees. However, if your company has a severance policy or plan, then it has to pay you severance if you meet the relevant eligibility requirements. Likewise, if you have an individual employment contract, then your employer is required to pay you any severance you are entitled to under your contract.

END_OF_DOCUMENT_TOKEN_TO_BE_REPLACED

Often, companies offer money or other benefits to employees who they have laid off or fired, as part of a severance agreement or separation package. Most severance agreements require you to waive your employment law rights before you can receive those benefits. In a recent case, Gregory v. Derry Township School District, the Court of Appeals for the Third Circuit ruled that an employee waived her right to bring a discrimination claim against her employer because she signed a Separation Agreement and General Release, even though she only had 15 minutes to review it before she signed it.

The Third Circuit is the federal appellate court that handles appeals from the District of New Jersey. It ruled that when deciding whether an employee had waived his legal rights, a Court should look at the totality of the circumstances including:

END_OF_DOCUMENT_TOKEN_TO_BE_REPLACED

Many companies offer severance pay to certain employees who they have laid off, downsized, or fired. For example, some companies pay severance to employees who lose their jobs as part of a mass layoff or other reductions in force. Severance is often based on one or two weeks of pay for each year you worked for the company, but the way severance pay is calculated can vary greatly from one job to the next.

Severance pay can help soften the blow of losing your job. However, most severance agreements require you to sign away important legal rights. As a result, it is very important to make sure you understand all of the terms of your severance offer before you agree to it.

In New York and New Jersey, there is no legal obligation for companies to pay any severance to employees. However, if a company has a severance policy, it must follow it. Similarly, if you have entered into an employment contract which entitles you to severance, then your employer must comply with your contract.

END_OF_DOCUMENT_TOKEN_TO_BE_REPLACED

A significant portion of the EEOC’s guidance discusses what is required for a waiver in a severance agreement to be valid. Specifically, waivers (1) must be knowing and voluntary, (2) must offer the employee some consideration, meaning a benefit the employee would not otherwise receive, and (3) must comply with applicable state and federal laws.

The EEOC notes that, to determine whether an employee knowingly and voluntarily waived the right to sue for employment law claims like discrimination, retaliation, or harassment, courts generally consider factors such as:

END_OF_DOCUMENT_TOKEN_TO_BE_REPLACED

In most cases, it is helpful to prepare a chronology or timeline of the relevant events for your employment lawyer. Generally, the chronology should be brief — in most instances between 1 and 3 pages. It should list the most important events relating to your employment issue, and identify the names and job titles of the people involved in those events. When possible, the chronology should provide the dates of the key events, and ideally should be in chronological order.