The plaintiff, identified as “T.D.,” is a police officer in the Tinton Falls Police Department. In 2008, one of T.D.’s fellow officers reported to the Monmouth County Prosecutor’s Office that a police sergeant had installed a device called a diverter at his home so his personal water use would not be recorded. Instead of investigating the sergeant, the Police Department began an Internal Affairs (“IA”) investigation to determine who had contacted the prosecutor, and then brought disciplinary charges against that officer. When T.D. learned about this he objected to the Department’s decision to discipline the officer who complained, but not to even investigate the sergeant’s apparent crime. 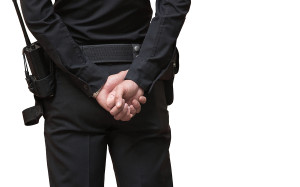 In March 2009, T.D.’s sergeant asked to meet with him outside a local dumpsite, where he told T.D. he should have warned him about the prosecutor’s investigation. T.D. indicated he believed doing so would have unlawfully interfered with the prosecutor’s criminal investigation. During the meeting, the sergeant also made disparaging comments about the officer who initially reported the water diverter, and told T.D. that “everyone should watch their backs.”

After this meeting, T.D. asked his union’s lawyer to send a letter to the prosecutor’s office about the sergeant’s warnings. T.D. subsequently submitted a formal statement to the prosecutor.

T.D. alleges he experienced retaliation because of his objections. For instance, he was removed him from the K–9 unit in January 2010 and denied a promotion in December 2010. The Department failed to promote him again approximately 5 months after he filed his lawsuit. It subsequently assigned him to patrol the local mall, which is considered a “punishment post.”

The trial court granted Tinton Falls’ motion for summary judgment. It concluded T.D. did not engage in any whistleblowing conduct protected by New Jersey’s Conscientious Employee Protection Act (“CEPA”). It found CEPA  protects only employees who object about the employer’s illegal activities, and T.D. merely objected about a sergeant diverting water at his home.

In an unpublished opinion, T.D. v. Borough of Tinton Falls, the Appellate Division reversed. It noted that, at least under certain circumstances, CEPA prohibits employers from retaliating against employees because they object about a coworker’s illegal activity. The court concluded that T.D.’s objection about his sergeant’s statement that he should have tipped him off about the prosecutor’s investigation is protected by CEPA.

The Court found it significant that instead of investigating the sergeant’s criminal conduct, the Department improperly used an IA investigation to learn who made the report to the prosecutor; brought disciplinary charges against that officer; and referred to officers who spoke to the prosecutor about the sergeant’s conduct as “rats.” It concluded that this evidence reinforces the inference that the Department did not tolerate employees who failed “to keep quiet about illicit conduct engaged in by fellow officers,” or who failed to warn fellow officers about legal proceedings against them.

The Court also ruled that T.D.’s objection about the fact that Tinton Falls was aware of the sergeant’s crime, but failed to investigate it because he is a member of the Police Department, is protected by CEPA. Specifically, it found that objection falls within CEPA’s protection for employees who provide information to a public body that is investigating a violation of law by their employers. In doing so, the Court recognized that T.D.’s objection implicates the “blue wall” of silence, referring to the fact that police officers often are reluctant to incriminate their fellow officers. As the Court explained, “[p]olice officers take an oath to uphold the law and their position ‘require[s] a high level of honesty, integrity, sensitivity, and fairness in dealing with members of the public, knowledge of the law, and a pattern and exhibition of law-abiding conduct.’” Accordingly, the Court remanded the case to the trial court.