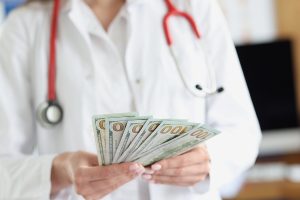 On August 3, 2016, Ms. Gathman submitted a report to members of Care One’s upper management, including Ms. Straus and Mr. McKinney.  Ms. Gatham’s report indicated that she already had returned approximately $3 million of the overpayments, and was working to returning the balance within 12 to 18 months.

On August 4, 2016, Ms. Straus told Ms. Gathman that Care One was considering promoting her to Vice President of Finance.

On August 11, 2016, Care One received progress reports which showed the credit balances in Ms. Gathman’s region were twenty-three percent higher than other regions.  The very next day, August 12, 2016, Mr. McKinney gave Ms. Gathman a letter terminating her employment, effective immediately, claiming Care One had lost confidence in her.

Ms. Gathman filed a lawsuit against Care One, Ms. Straus and Mr. McKinley, among others, in which she alleged their decision to fire her was in retaliation for her returning $3 million to Medicare, Medicaid and individuals.  She asserted a claim of retaliation under the Conscientious Employee Protection Act (“CEPA”) and a claim of wrongful termination in violation of New Jersey’s common law, also known as a Pierce claim.

Eventually, the defendants filed a motion for summary judgment.  The trial court granted the motion, finding there was not enough evidence to prove the defendants had retaliated against Ms. Gatham, and dismissed her case.  Ms. Gatham appealed.

On February 22, 2022, in Gathman v. Care One Management, LLC, the Appellate Division reversed that ruling.  It recognized the close timing between Ms. Gathman’s report about having returned $3 million of overpayments on August 3, and Care One firing her only 9 days later, on August 12, supports an inference of retaliation.  It further explained that a jury could find Care One used its August 11 report about credit balance as a pretext (or excuse) to retaliate against her since it had recruited Ms. Gatham to return to work for it based on her past success for it and it was considering her for a promotion as recently as August 4, yet nobody even bothered to give her an opportunity to discuss the August 11 report with them before it fired her.