Specifically, the Court adopted a defense that previously applied only in federal cases. That defense is often referred to as the “Faragher/Ellerth defense,” from the two United States Supreme Court cases that initially adopted the defense under federal law: Faragher v. City of Boca Raton and Burlington Industries v. Ellerth.

To understand this defense it is important to understand two ways in which employers can be held liable for sexual harassment committed by one of their employees. One way is if the victim of the harassment proves the employer was negligent. This is usually accomplished by showing the employer did not have an anti-harassment policy, or that its policy was not effective.

The Faragher/ Ellerth defense applies in limited circumstances. It applies only to the vicarious liability theory, not to the negligence theory described above. It also does not apply when the harassment led the victim of the harassment to experience a tangible employment action such as being fired, demoted, suspended, or forced to resign. 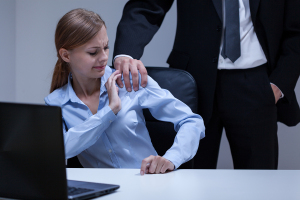 But when the Faragher/Ellerth defense does apply, it provides the employer a defense to liability. Specifically, under this this defense an employer cannot be held responsible for sexual harassment if it can prove:

The Aguas case is not all bad news for employees. It also expands the definition of a “supervisor” under the LAD.

In interpreting the primary federal anti-discrimination law, Title VII, the United States Supreme Court has ruled that a supervisor is someone who has the authority to make decisions regarding hiring, firing, promotions, demotions, discipline, compensation, or other tangible employment actions.

In light of the new defense to harassment claims created by the Aguas case, it is now even more important that employees who experience sexual harassment at work should complain to the company’s human resources department or someone else designated to receive complaints.

Of course, there are times when it is reasonable for an employee not to make an internal complaint about harassment, such as when the employee does not even know there is a policy, has been threatened with retaliation if she makes a complaint of harassment, or has evidence that the policy is not effective. However, failing to make a complaint can jeopardize a potential sexual harassment case.