In a recent employment law case, Davis v. Husain, the New Jersey Supreme Court held that a judge may not engage in any communication with a member of the jury outside of the presence of the lawyers involved in the case (known as ex parte communications), including discussions after the jury has rendered a verdict. In this case involving a claim of sexual harassment, the jury found plaintiff’s former employer liable for having engaged in sexual harassment. After the verdict was rendered and the jury was dismissed, a juror mentioned to the trial court judge that the defendant had not placed his hand on the Bible when taking the oath before he testified. The conversation between the judge and the juror occurred outside the presence of counsel involved in the case.

The judge later advised the attorneys for both parties of the comment by the juror. In motions filed after the trial, the defendant moved for a new trial. The trial court denied the motion, and the Appellate Division agreed with the trial Court. The defendant then appealed to the New Jersey Supreme Court.

In reaching a decision in the case, the Supreme Court noted that under the Court Rules all communications between a judge and a jury during a trial must be in open court. The Court considered two Appellate Division cases in New Jersey, a civil case and a criminal case. In both of these cases, the Appellate Division expressed disfavor as to the ex parte communications between the judge and jury after the jury reached a verdict.

The Court indicated that it wanted to be clear in terms of the rule and to provide a “bright-line” for judges concerning communications with jurors outside of the involvement and presence of counsel and parties to a litigation. The Court stated specifically, “[p]ost-verdict ex parte communications between the trial court and jurors cannot be countenanced. The informality of such encounters, however benign their intended purpose, creates the possibility for the innocent remark or question to spark an attempt to plumb jurors’ decision-making processes.”   The Court held that all ex parte communications between a judge and juror are prohibited, including post-verdict communications. 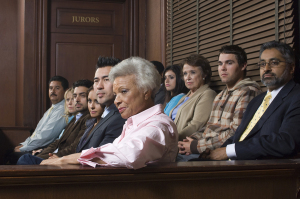 The case was remanded for the trial court to determine whether the comment made by the juror to the judge post-verdict had any impact on the jury deliberations or the ultimate verdict. In remanding the case, the Court provided that the investigation be conducted by a different judge than the trial judge involved in the case, and that the investigation be narrow to preserve the secrecy of the jury deliberations.