There is no clear answer to how little time can be considered “unusually suggestive.”  But in a recent case the United States District Court for the District of New Jersey ruled a jury can find retaliation because the employer fired the employee eight days after her last protected activity. 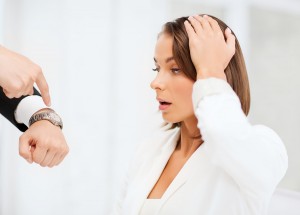 Zalinskie v. Rosner Law Offices, P.C., Linda Zalinskie claims her employer, Rosner Law Offices, P.C., fired her because she complained about violations of the Fair Labor Standards Act (FLSA).  In contrast, the firm claims it spoke to Ms. Zalinskie about problems with her job performance and attitude nearly a year before she made these complaints, moved her into a new position at the time, and ultimately fired her because her performance and attitude did not improve.

In early September 2011, Ms. Zalinskie called the New Jersey Department of Labor (NJDOL) twice because the firm was giving her compensatory time off when she worked overtime instead of paying her time-and-a-half. She also submitted a written complaint to the NJDOL on September 4, 2011.

On September 19, Ms. Zalinskie called the NJDOL again because the law firm had docked her pay when she arrived to work 6 minutes late.  The following day she met with her supervisor and the firm’s office manager.  During the meeting, she complained about the firm docking her pay even though she was a salaried employee.  When asked why she believed this was unlawful, Ms. Zalinskie indicated she leaned it from the NJDOL.  The next day, the firm’s office manager asked Ms. Zalinskie to provide proof the firm had violated the law.

On September 23, 2011, an investigator from the NJDOL made an unannounced visit to the firm, claiming he was conducting a random audit.  Six days later, on September 29, 2011, the firm fired Ms. Zalinskie.  The firm says it decided to fire Ms. Zalinskie on September 21, 2012, the day on which it asked her to prove it was unlawful to dock her pay, but decided to wait to implement its decision.  Of course, the firm also claims it fired Ms. Zalinskie for poor performance rather than because of her complaints about violations of the FLSA.  In fact, it denies learning Ms. Zalinskie filed a complaint with the NJDOL until after it fired her.

Based on these facts, the court concluded there is enough evidence for a jury to find the firm fired Ms. Zalinskie because of her complaints to the NJDOL.  It found her termination was “almost contemporaneous” with her complaints to the NJDOL and the NJDOL’s audit of the firm because she was terminated “less than a month after she filed a written complaint with the NJDOL, eight days after she told [her boss] at the September 21, 2011 meeting that the source of her wage allegations was the NJDOL, and six days after” the NJDOL investigator audited the firm.  In contrast, although the firm could have fired her for poor performance for nearly a year, it did not decide to do so until shortly after she complained to the DOL.  Accordingly, the judge denied the firm’s motion for summary judgment, thereby giving Ms. Zalinskie a chance to try to prove her case to a jury.