Earlier this month, the United States Court of Appeals for the Second Circuit issued an unpublished summary order which reinstates an employee’s sexual harassment claim that had been dismissed.  However, in a separate published opinion issued on the same day the court upheld the dismissal of Ms. Castagna’s related tort claims because she did not file her lawsuit until after the statute of limitations had expired. 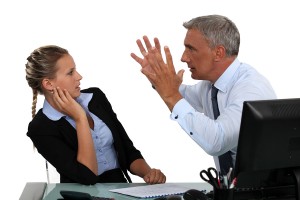 Patricia Castagna worked for Majestic Kitchens, Inc., as its receptionist.  She alleges Bill Luceno, who is the owner of the company and was Ms. Castagna’s supervisor, harassed her because of her sex in violation of Title VII of the Civil Rights Act of 1964 and the New York State Human Rights Law (“NYSHRL”).  Prior to the appeal, the trial court had dismissed those claims because Ms. Castagna admitted Mr. Luceno treated virtually all of the company’s employees poorly.

In support of her sexual harassment claims, Ms. Castagna claims Mr. Luceno physically threatened her and two other female employees with physical violence, but never physically threatened any male employees.  For example, she claims that on one occasion he screamed and cursed before he shoved her computer monitor toward her, which caused her to fear for her safety. Although she acknowledges Mr. Luceno’s had outbursts toward both male and female employees of Majestic, she claims the most extreme outbursts were directed toward women, and that during some of his outbursts he referred to women as “bitch[es].”

In reversing the trial court, the Second Circuit explained that threats of physical violence can be very strong evidence to support a hostile work environment claim.  It also indicated the fact that Mr. Luceno only threatened women supported an inference that he was targeting them because of their gender.  It ultimately found all of the evidence, considered together, would permit a reasonable jury to conclude that Ms. Castagna’s workplace was hostile and abusive because of her gender.  Accordingly, the court issued a summary order which reversed the trial court’s ruling that had granted summary judgment to Majestic.

However, in a separate opinion the Second Circuit upheld the dismissal of Ms. Castagna’s claims of intentional infliction of emotional distress, assault, and battery because she filed them after the one year statute of limitations had expired.  It ruled that even though Ms. Castagna filed a charge of discrimination with the United States Equal Employment Opportunity Commission (“EEOC”) within 300 days after the harassment occurred, and her tort claims are based on the same facts as her harassment claim, filing with the EEOC does not toll the one year statute of limitations on other claims.  Rather, if Ms. Castagna wanted to pursue her tort claims she needed to file a lawsuit within one year after the relevant events occurred instead of waiting until the EEOC finished its investigation into her harassment claim.  Accordingly, in a formal published opinion in Castagna v. Luceno, the court affirmed the trial court’s order dismissing Ms. Castagna’s tort claims.