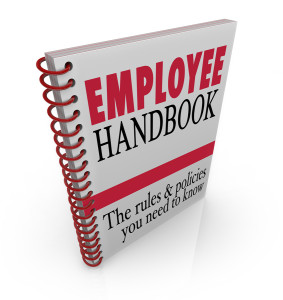 Last week, New Jersey’s Appellate Division ruled that Raymours Furniture Company cannot enforce the arbitration policy in its employee handbook because the handbook expressly states that it is not a contract. As a result, former Raymours & Flanigan employee Grant Morgan can proceed with his age discrimination claim in court rather than in arbitration.

Mr. Morgan alleges he experienced age discrimination in the workplace, and when he complained about it the company instructed him to sign an arbitration agreement or it would fire him. When Mr. Morgan refused to sign the agreement, the company followed through with its threat and fired him.

After Mr. Morgan filed a lawsuit, Raymours asked the court to enforce the arbitration provision in its employee handbook. The trial court denied its motion, and Raymours appealed.

Like most companies, Raymours’ employee handbook contains a prominent disclaimer declaring that it is not a contract. Specifically, it states that:

Nothing in this Handbook or any other Company practice or communication or document, including benefit plan descriptions, creates a promise of continued employment, [an] employment contract, term or obligation of any kind on the part of the Company.

These types of disclaimers are common because of Woolley v. Hoffman-La Roche, a 1985 New Jersey Supreme Court opinion. Woolley recognizes that employees generally can bring claims when their employers violate promises in their employee handbooks unless the handbook includes a prominent disclaimer making it clear it is not an enforceable contract. As a result, most employers include disclaimers in their handbooks so they cannot be sued for violating their own internal policies.

The Appellate Division ruled it would be unfair and improper for an employer to enforce an arbitration provision in an employee handbook that contains such a disclaimer. Specifically, it ruled that Mr. Morgan did not “clearly and unambiguously waive his right to sue [Raymours] in court.” The court explained that allowing Raymours to enforce the arbitration provision under the circumstances would run counter to the old English proverb, “wolde ye bothe eate your cake, and haue your cake?” In other words, Raymours cannot eat its cake and have it too.

The appellate court further noted that although Mr. Morgan signed a rider to the employee handbook, it merely states that he received and understood the handbook. It did not state that he agreed to be bound by its terms. As a result, the court ruled that Raymours “cannot fairly contend the employee ‘agreed’ to a waiver of the right to sue that might be found within those materials.”

Thus, in the published opinion of Morgan v. Raymours Furniture Company, Inc., the Appellate Division affirmed the trial court’s ruling that Raymours cannot enforce the arbitration provision against Mr. Morgan. Instead, he will be able to proceed with his case in a New Jersey state court.

This decision is one in a growing trend of opinions which are careful to enforce arbitration agreements between employers and employees only when the employees clearly and unambiguously agreed to waive their right to pursue their disputes in court. For more information about limitations on enforcing arbitration agreements, please read our previous article: Arbitration Agreement Unenforceable Unless Clearly Indicates Waiving Right to Go to Court.