A recent ruling from the United Stated Third Circuit Court of Appeals in a wage and hour lawsuit holds that an employer cannot use the fact that it voluntarily paid its employees during their lunch to offset periods when employees worked but were not paid.  The Third Circuit is the federal appellate court that handles cases from several districts, including the District of New Jersey.

The case was brought by Bobbi-Jo Smiley, Amber Blow, and Kelsey Turner, three former employees of E.I. Dupont De Nemours & Co. and Adecco USA, Inc. (collectively, “DuPont”), as a potential class and collective action.  They claimed DuPont failed to pay them overtime for a total of approximately 30 to 60 minutes per day for time they spent (1) “donning and doffing,” meaning putting on and taking off their uniforms and protective gear, and (2) “shift relief,” meaning updating the employees who would be relieving them on the next shift.  Since the employees routinely worked more than 40 hours per week, they claimed they were entitled to time-and-a-half for these additional pre-shift and post-shift overtime hours. 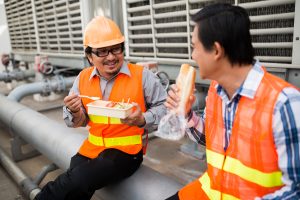 The workers sued under the Fair Labor Standards Act (“FLSA”) and a similar state wage and hour law.  After 160 workers joined the lawsuit, DuPont filed a motion for summary judgment seeking to have the case dismissed.  The company argued that because it had voluntarily paid the workers during their lunch and other meal breaks – something it was not legally required – those payments should offset any additional overtime pay which the employees might be entitled to receive.  The trial court agreed and dismissed the case since the paid meal breaks were longer than the unpaid donning and doffing and shift relief time.  The employees appealed.

On October 7, 2016, in Smiley v. EI DuPont de Nemours & Co., the Third Circuit reversed.  It explained that although the FLSA does not require employers to pay employees during meal breaks, if an employer chooses to do so and treats that time as if it were part of their normal compensable time worked, then it is required to include those paid hours when it calculates overtime pay.  In other words, because DuPont treated lunch and other breaks as if they were regular paid time, it is required to include those hours when it calculates its employees’ overtime pay.

The Court further explained that although employers can use certain extra payments it makes to employees as a credit toward any overtime pay it owes them, it cannot use time that was (or was required to be) included in their overtime pay calculation as such an offset.

The Third Circuit therefore reversed the trial court’s ruling.  However, since the trial court never reached the question of whether the employees actually were entitled to be paid for donning and doffing their uniforms or for their shift relief time, those issues presumably still need to be addressed.

Overtime and minimum wage claims are becoming increasingly common.  For more information about your employment law rights, including your rights under New York and New Jersey wage and hour laws, please feel free to visit our website.