A recent decision from New Jersey’s Appellate Division recognizes that the anti-retaliation provisions of the Americans with Disabilities Act (“ADA”) and Title VII of the Civil Rights Act of 1964 (“Title VII”) do not protect an employee who submits a false affidavit in support of a coworkers’ discrimination claim. 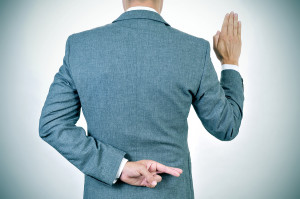 Ariel Gonzalez, worked as a Detective for the Waterfront Commission of New York Harbor.  In June 2012, he signed an affidavit in support of the Commission’s former assistant general counsel, Kimberly Zick, in connection with Ms. Zick’s discrimination lawsuit against the Commission under the ADA and the Rehabilitation Act of 1973.  Ms. Zick’s case was dismissed in October 2012 because her allegations did not support her claims.

In response, Det. Gonzalez filed a lawsuit in in which he claimed the disciplinary charges against him were retaliation in violation of the ADA, Title VII and the First Amendment to the United States Constitution.  He also sought a preliminary injunction prohibiting the Commission from proceeding with its disciplinary charges against him.  The Court denied his request for an injunction.

Det. Gonzalez then had a disciplinary hearing in New York before an Administrative Law Judge (“ALJ”).  The ALJ made it clear he would not consider Det. Gonzalez’s retaliation claims during the hearing.

During the hearing, the Commission presented evidence that several of the statements Det. Gonzalez made in his Affidavit were false.  For example, it presented evidence that he falsely claimed he was present for a meeting that he did not attend and falsely claimed that an email he received indicated that if he and other employees failed to save emails they received from Ms. Zick they would be fired.  Det. Gonzalez testified that his statement about the meeting was consistent with his recollection, but he did not recall receiving an email threatening to fire anyone who deleted emails from Ms. Zick.

Ultimately, the ALJ concluded that the statements in Det. Gonzalez’s affidavit were false, were made in “reckless disregard for the truth” and were sufficient grounds to justify terminating his employment.

The Commission upheld the ALJ’s recommendation and fired Det. Gonzalez.  In doing so, it concluded that that the decision to terminate his employment was not in retaliation for his providing an affidavit in support of a co-worker’s discrimination claims.

Det. Gonzalez appealed, arguing that even if his affidavit contained false information, the Commission could not fire him for submitting it because doing so would constitute unlawful retaliation in violation of the ADA and Title VII.  Title VII, a federal anti-discrimination law, prohibits employers retaliating against an employee “because he has opposed any practice made an unlawful employment practice by [Title VII]” or because he “testified, assisted, or participated in any manner in an investigation, proceeding, or hearing under” it.  The ADA adopts the same anti-retaliation provision.

The Appellate Division, in In the Matter of Gonzalez, concluded that although this provision is “quite broad,” it “falls well short of providing an absolute privilege that immunizes a knowingly false affidavit and knowingly false statements made under oath.”  It explained that employers are legally obligated to investigate alleged violations of discrimination laws, and with that obligation comes the right to discipline individuals who make false statements in support of those claims.  The Court also made it clear that this is even more applicable here, since Det. Gonzalez is a law enforcement official who is required to file accurate reports.  Accordingly, the Appellate Division affirmed the Commission’s decision to terminate Det. Gonzalez’s employment.