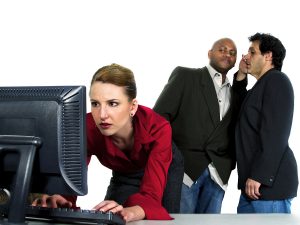 In addition, employees began spreading rumors that Officer Schiavone had obtained her job in Central Control because she was having an affair with S.D.  For instance, Lieutenant Christopher Danielson said he did not “give a f–k who [plaintiff] f—ed to get this job.”

Officer Schiavone eventually filed a lawsuit in which she alleged that the DOC had sexually harassed her in violation of the New Jersey Law Against Discrimination (“LAD”).  Her case proceeded all the way to a trial.  At the end of the trial, a jury found the DOC had sexually harassed Officer Schiavone, and awarded her $100,000 in emotional distress damages plus $216,875 in punitive damages.  In addition, the trial judge subsequently awarded Officer Schiavone $585,014.35 in attorney’s fees and legal costs, for a total judgment of more than $900,000.

The Appellate Division disagreed.  In its December 26, 2019 opinion in Schiavone v. New Jersey Department of Corrections, the Court noted that a previous Appellate Division opinion recognized that rumors of a sexual relationship are “facially sex-related” and therefore are “because of sex.”  It also recognized that the Third Circuit Court of Appeals has held, in the context of another case involving rumors of a sexual relationship between a female employee and a male supervisor, that there is a negative stereotype about the “relationship between the advancement of women in the workplace and their sexual behavior.”

Ultimately, the Appellate Division found there was enough evidence to support the jury’s conclusion that the DOC harassed Officer Schiavone because she is a woman.  Agreeing with the trial court, it explained that “a female officer would endure unique implications because of the rumored affair which a male counterpart would not.”  Thus, the appellate court ruled that a female employee can base a sexual harassment claim on false rumors that she was having an affair with a male employee.  Accordingly, it affirmed the jury’s verdict.