New Jersey’s Appellate Division recently ruled that federal labor law does not preempt an employee’s disability discrimination claim under the New Jersey Law Against Discrimination (“LAD”) or retaliation claim under the Workers’ Compensation Law (“WCL”).  Federal labor law preempts state law claims that require an interpretation of a collective bargaining agreement (“CBA”) between an employer and a union, meaning any such state law claims cannot proceed. 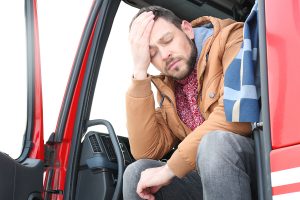 Brian Hejda, a union member, worked as a commercial truck driver for Bell Container Corporation.  In August 2012, he suffered a knee injury at work.  Mr. Hejda’s doctor placed him on restrictions and required him to work “light duty.”  Bell did not return him to work because it did not have a light duty position for him.  An orthopedist subsequently cleared Mr. Hejda to return to work in late September, but indicated he needed the same restrictions and could not drive a commercial truck.

In February 2013, another orthopedist cleared Mr. Hejda to return to work without any restrictions.  Several weeks later, Bell sent a letter to the union indicating that under a Department of Transportation (“DOT”) Federal Motor Carrier Safety Regulation, Mr. Hejda could not return to driving a commercial truck until a Certified Medical Examiner medically examined and certified him “physically qualified to operate a commercial motor vehicle.”

The union filed a grievance, claiming Bell had violated the CBA by failing to immediately return Mr. Hejda to work.  The CBA includes a provision that allows the company to condition permitting an employee to return to work on him complying with legal requirements such as the ones in the DOT regulation.

In April 2013, Mr. Hejda’s family physician wrote a report indicating that Mr. Hejda met the requirements of the DOT regulation to return to work as a commercial truck driver.  However, since the report mentioned an issue with Mr. Hejda’s leg rather than his knee, Bell claimed his physician must not have had copies of his medical records and that the certification was provided “under false pretenses.”

In July 2013, an arbitrator denied the union’s grievance, concluding that Mr. Hejda’s medical evaluation did not meet the requirements of the DOT regulation and Bell was not required to return him to work until those requirements had been met.

In November 2013, Mr. Hejda submitted another certification from his physician which again stated he met the requirements of the DOT regulation and asked the company to return him to work as a truck driver.  Instead, Bell offered Mr. Hejda a different job as a “night switcher.”

Mr. Hejda filed a lawsuit against Bell, claiming the company discriminated against him because of his disability in violation of the LAD and retaliated against him in violation of the WCL by refusing to return him to his job as a truck driver.  Bell filed a motion to dismiss Mr. Hejda’s case, arguing his claims were preempted by federal labor law.  The trial court granted the motion on the basis that it would be necessary to interpret provisions of the CBA to decide his claims and Bell’s defenses.  Mr. Hejda appealed.

Earlier this month, in Hejda v. Bell Container Corp., the Appellate Division reversed the trial Court’s ruling and reinstated Mr. Hejda’s case.  It explained that federal labor law does not preempt every case in which a CBA has some limited relevance, but rather only preempts a claim if it is necessary to interpret the CBA to determine whether there has been a violation of law.  Applying this to Mr. Hejda’s claims, the appellate court concluded it is not necessary to interpret the CBA to decide if Bell Container discriminated in violation of the LAD or retaliated in violation of the WCL.

As discussed in my article, Federal Labor Laws Do Not Preempt Union Members Whistleblower Claim, the Appellate Division reached the same conclusion last year in a case decided under the Conscientious Employee Protection Act (“CEPA”).